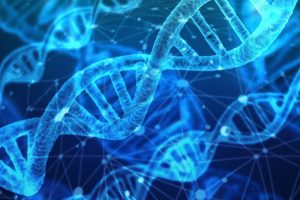 A key to automation success, in general, is to improve productivity and reduce operating costs, while creating new, innovative products for a defined customer base. This premise is especially true in the medical industry. When a U.S.-based medical manufacturer needed to accomplish this task, they needed to look no further than Belt Technologies who solved not one but two complex automation issues.

It’s in our DNA

Our tagline is “Precision on the Move,” and it’s by design—and found in each of our designs. First called upon to design automation equipment used in the production of revolutionary test systems for DNA analysis technology, our company was immediately put to the test, challenged to improve cycle times and reduce costs.

While the manufacturer’s DNA test procedure was markedly faster than competitive tests, and even faster than the company’s own previous offerings, the process by which the manufacturer produced the test was not. Initially, the company was producing the disposable reaction tube—a key element in the test—by hand, completing a paltry 400 tubes per day. Needless to say, some degree of automation was necessary to create the needed 18 million parts per year.

But increased throughput was only half of the equation: cost savings was the other.

After investigating a variety of options, a metal belt conveyor system was chosen to replace the automation in place, with the belts and pulleys supplied by Belt Technologies. The result? Improved process times and more than that—with the new configuration, four separate products could be run on the same line, increasing profits and making strides in the medical field.

The Nuts and Bolts of it All

Metal belts offer advantages over similar products, as well as belts made of other materials. To begin with, metal belts possess various unique properties that result in superior precision control, longevity, and cost effectiveness. In many cases, they are preferable to other belt types (such as rubber and fiberglass) as metal belts do not stretch like standard timing belts, and variations in surface speed are minimized. Metal belts from Belt Technologies also run without lubrication of any kind, offer unlimited travel lengths, and are available in a variety of alloys. When compared with other power transmission or motion control components (such as linear actuators, lead screws, and chains) metal belts are often preferred, due to their high strength-to-weight ratio, durability, and precise positioning.

After each assembly line was built, drive and idler pulleys, metal belts, and timing screws, which are used to attach the cleats, were integrated into the production process. Running flawlessly since 1999, the company again turned to Belt Technologies in 2020 in light of the COVID-19 pandemic to assist in the production of testing kits.

One of the key benefits of this vertical conveyor system is the flexibility to handle multiple products.  The belts were designed to connect with the company’s proprietary tooling through a common interface designed into each tool covering an array of different products, allowing for reduced changeover times. What’s more—the vertical solution, by utilizing both sides of the metal belt, doubled output without increasing operational costs. This was an especially important consideration considering the urgency of brining COVID-19 test kits to market.  Furthermore, given the direct public benefit of these test kits, Belt Technologies gave top priority to producing these belts on an expedited basis to meet the company’s substantially increased demand. It’s safe to say that Belt Technologies was “just what the doctor ordered” for this U.S. manufacturer. Does your assembly line need a similar cure? 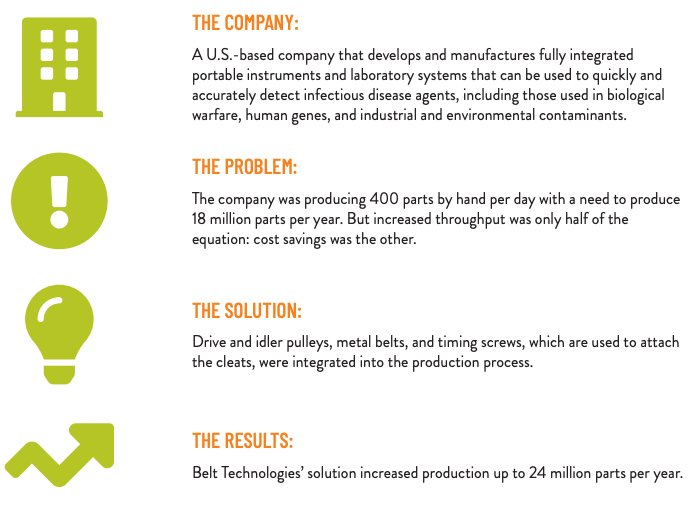 “We looked at various conveyor products and had a problem with the high mass of the system. The obvious solution was metal belts, which provide low inertia and excellent repeatability. Plus, in the future, we could also extend the line very easily, due to the flexibility of the belts.” —project lead
Design Guide and Engineer’s Reference for Metal Belts 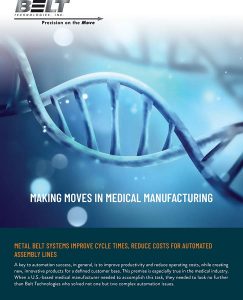