Recently, a customer from a previous project contacted Belt Technologies with a problem. Our engineers had provided them with a conveyor belt for the production of electrical connectors. Unfortunately, they were experiencing issues with the belt after it was installed in their system and they needed help identifying the source of the problem. Members of our team traveled to their location in Mexico to help their team troubleshoot the belt and provide them with a lasting solution. 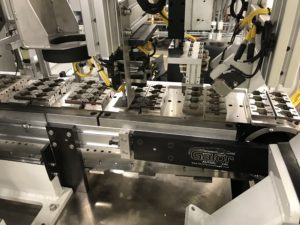 Originally, Belt Technologies produced a custom stainless steel conveyor belt that would support unique nesting attachments designed to hold electrical connectors in place as they were assembled. The belt was sent to a secondary builder, who then attached the custom fixtures. The individual fixtures were very heavy, weighing 1.45 pounds each; there were 48 fixtures in total. Because of the pulley dimensions, the belt was relatively thin. However, due to the high strength-to-weight ratio of stainless steel, the significant weight of the fixtures should not have caused the belt to fail so early in its operating lifespan.

Belt engineers traveled onsite to the customer plant to assist the end user with the setup and see if there was a solution for extending the belt life. After examining the system in operation, our engineers were able to determine that there was not enough clearance left between the fixtures on the belt and the legs of the system. As the fixtures traveled around the pulleys, they were striking the legs. Combined with minor alignment issues from incorrect installation, the repeated impacts contributed to chordal vibrations; these added stressors lead to fractures along the perforations of the belt and ultimately cause it to fail.

Our engineers were able to troubleshoot the issue and made small onsite adjustments to enhance productivity and save costs by reducing downtime and maintenance. They also helped train some of the end user’s employees on proper tracking and tensioning of the belt. Properly tensioning the belt fixed the underlying alignment issues with the pulleys that were contributing to the belt failure. The legs of the system were adjusted to provide enough clearance for the fixtures and prevent the repeated collisions that were damaging the belt.

Your System’s Success Is Our Priority

Our team was more than willing to work with the end user onsite to evaluate the machine as it ran, assess each element, and identify the cause of the issue. At Belt Technologies, the success of your automated system is our priority. We will always go the extra mile to ensure customers get the maximum possible lifespan from their conveyor belts.

For more information about custom stainless steel belts for your conveyor system, contact us today.