Back on Track: Belt Tracking Basics for Endless Metal Belts

Belt tracking refers to the methods used to keep a conveyor belt properly aligned and centered during linear motion. A belt tracking left or right is gradually moving in that direction. Conveyor belts must be centered on their tracks to achieve accurate and repeatable results, making belt tracking an important part of automated conveyor system design.

Belt tracking is necessary for keeping your equipment running smoothly and for maintaining optimal production. There are several options for ensuring your conveyor belt stays on track, whether you are designing a new conveyor or optimizing an existing system.

Conventional crowned friction drive pulleys are typically used with fabric belts and are not recommended for metal belts. If crowned pulleys must be used, it must be in conjunction with axis adjustment due to the fact that crowned pulleys will not self-center a metal belt. They work best with thin metal belts, which are able to conform to the crowned face of the pulley. Increasing tension can help achieve proper conformity between the belt and the face of the pulley. However, too much tension can permanently deform the belt. The optimal geometry for a crowned friction drive pulley is a full radius, with a chord height no greater than the thickness of the belt that is running on the pulley 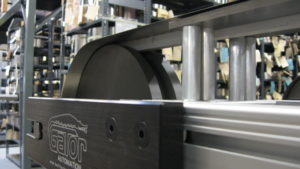 Generally, the belt will track in the direction of high tension to low tension relative to its width. Changing the belt edge tensions in a controlled manner can “steer” the belt. This method is referred to as pulley axis adjustment. The technique can also be used with flat-faced and crowned pulleys. Typically, the idler pulley is the only adjustable pulley; the drive pulley is difficult to adjust, as it interfaces with motors or other power transmission mechanisms.

Pulley axis adjustment generally applies to belts without timing features (e.g., perforations, which can be used to force the belt to stay on track). Using physical features such as perforations, cam followers, or glass-filled TeflonⓇ flanges to keep a belt on track is known as “forced belt tracking” and is used in cases where straightforward axis adjustment is not enough to eliminate tracking issues. Belt Technologies offers V-guide force-tracked belts with our custom two-element belt solution called the Metrak system, which can be utilized when simple axis adjustments cannot completely eliminate improper tracking. 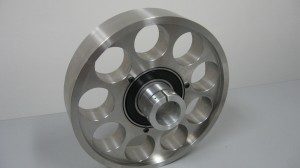 Belt Technologies also offers a proprietary system called the Independently Steerable Pulley (ISP), which can be adjusted with the turn of a knob to track the belt left or right until it is perfectly centered. The ISP system works well in two-pulley conveyor systems (in which the ISP is the idler or drive pulley), systems with multiple idler pulleys on a common shaft, or complex systems with serpentine or other complex paths. The ISP steering system was first implemented as a way to change tension relationships across the width of the belt by adjusting the relative angle of the pulley to the belt.

Belt Technologies can also offer customers guidance to fix tracking issues in existing automated metal belt conveyor systems. When troubleshooting belt tracking issues, it is important to fully understand the cause of the tracking problem. Only then can the proper adjustments be made. This can be achieved with simple checks, such as:

Once the cause of the issue is determined, it is important to make adjustments one at a time and then allow the belt to run through several cycles to guarantee the adjustments are properly incorporated. Belt Technologies has the knowledge and skills to correct most tracking issues for any given conveyor system.