Making Holiday Memories, One Tamale at a Time 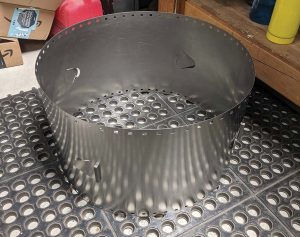 How a metal belt improved a time-honored tradition

It is believed that tamales originated as early as 8000 to 5000 BC in Mesoamerica. Adopted by Aztec and Mayan civilizations and then Mexican and Guatemalan cultures, tamales are enjoyed for their portability and versatility. Made of masa or dough steamed in a corn husk or banana leaf, tamales can be stuffed with meats, cheeses, fruits, vegetables, chilies, or any combination thereof. While eating them is easy, producing them can be tedious. It is for this reason that tamales are typically mass produced, often around the holidays, to be stored and enjoyed throughout the following year.

When engineering student Alejandra Marroquin had the opportunity to improve the time-consuming process, she seized the opportunity, putting her manufacturing knowledge and mechanical inclinations to use in her Senior Design class at California State University Long Beach.

Alejandra’s Senior Design professor placed students into groups, and allowed each to plan, design and produce a working prototype as their final project. Alejandra and her partners quickly settled on the prototype to produce: a hand-crank tamale maker. The idea was to cut down on the amount of time necessary to produce each tamale, and moreover, cut down on the manual stretching and rolling required.

Students used computer-aided design software, SolidWorks, to plan and map out the design of their assembly. Taking into consideration the various stages of tamale production—the extrusion of dough or masa, dispersion of filling, folding of the corn husk—they also considered how best to achieve a proper gear ratio and timing system. From the beginning, the students recognized the need for food grade parts including gears, a crank and conveyor belt, all of which they intended to source or fabricate.

In researching sanitary conveyor belts through an online search, Alejandra learned of and contacted Belt Technologies to discuss her project and to place what she believed would be an order. Recognizing the students’ entrepreneurial spirit and design sense, Belt was happy to deliver a gratis perforated endless belt. Not only did the belt meet the design specs, but it was also a durable and sanitary addition to the newly devised kitchen equipment, meeting safe food handling recommendations of the Food and Drug Administration.

The prototype developed is a mechanical tamale maker driven by a hand crank. After latching a corn husk into a slot on the stainless steel belt from Belt Technologies, the user must rotate the crank clockwise to engage gears that will move the tamale through each stage of production. This is accomplished smoothly, hygienically and with significantly less effort than one would exert if producing a tamale by hand.

Of the results, Alejandra Marroquin expressed appreciation for Belt Technologies, stating that, “The conveyor is really at the heart of the prototype. We are so grateful to Michael Loomer [Belt Technologies’ Business Development Manager] who not only helped with the part design but also with the fabrication and shipping.”

Michael Loomer was equally appreciative of the opportunity to contribute to the project sharing, “We always are up to a design challenge and although this was a student project, our design intake, consultation and design was not dissimilar from a traditional company order. We’re happy to hear that our product aided in the finished project and wish Alejandra and her team members continued success in the future.” 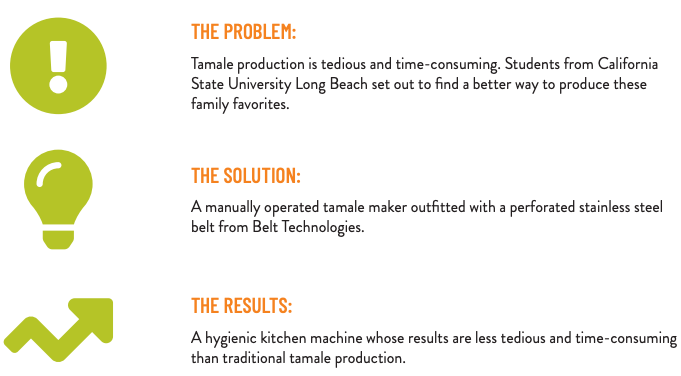 “The conveyor is really at the heart of the prototype. We are so grateful to Michael Loomer [Belt Technologies’ Business Development Manager] who not only helped with the part design but also with the fabrication and shipping.” — Alejandra Marroquin, California State University Long Beach student
Design Guide and Engineer’s Reference for Metal Belts 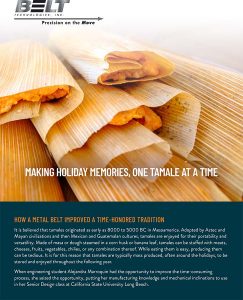