An OEM producing capital equipment for the beverage industry was referred to Belt Technologies to solve a problem with their bottle cap printing conveyor. The unreliability of their system was causing the labels to print incorrectly on bottle caps being transported by the belt, driving them to seek out a new conveyor belt that would transport the bottle caps through the printing process with a higher degree of accuracy. 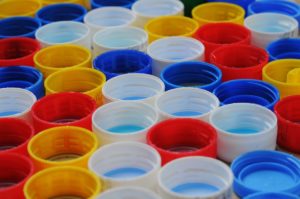 To print the labels, the bottle caps were passed through a heated area then returned to an ambient temperature. The original conveyor belt used by the OEM was made of a material that could not tolerate these high temperatures. Exposure to the irregular heat source caused the belt to warp, which created uneven tracking and alignment.

The warping of the original belt led to inaccurate positioning of the bottle caps. The OEM was not satisfied with the printing results. Label text was blurred, missing, or placed incorrectly due to the inaccurate product handling of the belt. This caused unnecessary expense in the form of product loss for the OEM.

To maximize the belt’s ability to withstand high temperatures, Belt Technologies’ engineers suggested a replacement belt made of Invar, an alloy with a very high resistance to heat that would maintain its shape under thermal stress.

The thermal expansion coefficient for Invar, generically referred to as “FeNi36” (or “64FeNi” in the US) is very low. Its name comes from the word invariable, in reference to the metal’s lack of expansion or contraction in the face of extreme temperatures. Uneven heat from the bottle cap printing process would not cause the Invar conveyor belt to warp.

Printing clear, legible labels on such small surface areas requires ultimate precision and positioning accuracy. Lateral linearity, or the maximum allowable deviation of actual performance in relation to a straight line, is important in applications where positioning is key. Generally speaking, stainless steel conveyor belts have superior accuracy and repeatability, however when extremely high temperatures are involved low thermal expansion coefficient alloys like Invar may be necessary.

A center line perforation was added to the belt in order to apply a vacuum that would hold the small bottle caps in place and further ensure their positional accuracy on the conveyor belt. With an improved, heat-resistant material and a design upgrade, the OEM was able to improve the clarity and quality of its bottle cap printing equipment.

Is your conveyor system lacking the accuracy and repeatability you require to produce a perfect product? Contact the experts at Belt Technologies today!