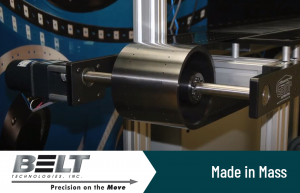 Please join us in celebrating everything the Bay State has to offer, including metal belts, of course!

Today is National Massachusetts Day! Let’s take a moment to acknowledge and celebrate some of the wonderful products that have come out of our home state, the Bay State. If you’re from the Northeast, these might make you even prouder to have hailed from here. If you’re not from Massachusetts, we still think you’ll find these fast facts interesting.

Precision on the Move

A resident of Woburn at the time of his discovery, Charles Goodyear is credited with developing the process of rubber vulcanization—a process used in the production of rubber tires. His story is one of strife and perseverance, but his hard work paid off. Today, there is one rubber tree for every two humans on Earth, and the trees’ cultivation helps to create, of course, tires, and other everyday items we may overlook or take for granted: hot water bottles, boots and dishwashing gloves, among others.

Of course, it’s Goodyear’s tire discovery that he’s best known for as it revolutionized the way the world travels. (Dare we say, that’s similar to our tagline: precision on the move.)

Belt Technologies has a tire tie-in; our company provided a conveyor that will be used in the recycling of used tires. You may find it interesting to note that when it comes to traditional methods of tire recycling, the standards are grinding, shredding, crumbing and incineration. All of these methods have some negative environmental impacts.

The tire recycling process Belt’s product will be involved in uses microwaves to extract a tire’s oil, along with other valuable by-products. The process does not melt tires, but rather, breaks apart their molecular bonds, allowing for reclamation of virtually 100 percent of a tire’s by-products, including the reclamation of the carbon black, oil, steel and hydrocarbon gas.

The system will see high heat, an abrasive product and microwave radiation, which our stainless steel belts are ideally suited for.

Made in Mass: Microwave Ovens

Percy Spencer, an American physicist, a native of Newton, MA, discovered microwave technology and invented the microwave oven. A self-taught scientist, he was remarkably adept at mathematics and science disciplines, however, it was a happy accident that led to his best-known invention.

Standing too close to a magnetron (a microwave tube used in radar technology) caused a chocolate bar in Percy’s pocket to melt. Wondering if this type of energy could cook food, he placed corn kernels near the magnetron and to his (and later, the world’s) delight, microwave popcorn was invented.

As foodies ourselves—we have a hand in nearly every food processing application (cooking, freezing and transporting) and industry (dairy, frozen food, seafood and more)—we celebrate our like-minded friend, Spencer, and celebrate his ingenuity and advancement of food processing—something that we likewise are so proud to have a hand in.

We also celebrate these Massachusetts’ inventions:

Of course, we’d be remiss if we didn’t celebrate the sophisticated technology and innovative processes from our own engineering team, operating in Agawam. We can essentially serve any industry that relies on assembly lines and automated production systems. Printing, food processing, medical device manufacturing, robotics, solar panel technology, battery production, and semiconductor and electronics production represent some examples of industries that use our products.

If you’d like to learn more about our company or products, we’ll be happy to discuss both over the phone or over a cup of Dunkin’ coffee (created in Quincy).

Any cookies that may not be particularly necessary for the website to function and is used specifically to collect user personal data via analytics, ads, other embedded contents are termed as non-necessary cookies. It is mandatory to procure user consent prior to running these cookies on your website.